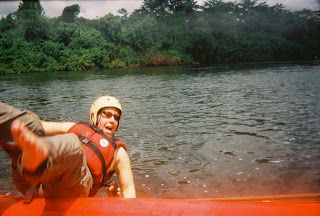 One of your stories in Mug of Woe is about your Mom.  Tell us a funny story about your Mom.
A funny story about my mother:  Hmm.  So many half-baked stories in my head.  Here's a quick snapshot of a time she stood apart from the other mothers in our neighborhood.  Way back in the 70s, our neighborhood decided to have a block party.  Someone dragged a big TV out onto the street with mega-extension cords to play movies and cartoons.  There was potluck food from everyone on our street.  Games, contests, all of the cliches like potato sack and three-legged races.  On our street, two moms were named "Pat," mine and Mrs. McKeon.  For some reason that became a source of competition, who was the Alpha Pat.  At least that's how I imagine it in my look back on childhood.  One of the prizes kids were given out during the contests were paddle balls -- the wooden paddle with a rubber string and small rubber ball hanging from it. My mom was pretty good with it, having just the right wrist action.  For some reason, smack talk arose and the gauntlet was thrown down to the other Pat for a paddle ball contest.  My normally shy, school teacher mom, girded her loins for battle.  It was epic.  I remember her as a paddle ball warrior who totally dominated psychologically and physically, paddling for a hushed crowd into the hundreds.  She wiped the mat with the other Pat and declared herself town paddle ball champion.  For weeks, she'd pick one up around the house and bat it around a bit, feeling the weight of the rubber ball and the pull of the string, and then go back to her usual chores.
A theme park wants to build a ride based on you. What type of ride would it be, and what would it be called?
Theme park:  I think my theme park ride would be kind of a fun house, where you get lured by a seemingly normal facade up onto a boring porch and then through the door into something different.  Part of the effect would be both entering the crazy turns and unexpected things a usual funhouse has, combined with folks outside watching through a two-way mirror or something the reactions of the people inside.  The people-watching is actually more interesting to me.  I created that situation kind of accidentally on purpose at work.  I had to plan a "team-building" event and brought 30 people to my friend's studio, where he makes artisanal birdhouses, to play with power tools.  Only it's a tiny garage with makeshift everything in a tiny yard, and I led everyone through to his single file maze of birdhouses on shelves until they realized that they couldn't turn around and had to shimmy past each other to squeeze back out from whence they came.  The reactions to all of it were amazing, it was so out of everyone's expectation zone.
You are required to move to a deserted island for one year.  You are allowed to take five items.  What do you take?
Ahhh, the old desert island question:  My iPad, my iPod Touch, a solar generator to keep them charged, juggling balls or clubs and I guess my boyfriend would be a nice round up for the five.
Pimp yourself --- what are you working on right now and where can our readers find your work?
I wish I had something to pimp hard.  I plan on reawakening my 'blog (at dee-rob.com) and my stand up comedy any minute now.  In fact this week, I've lost someone close to me, and it's a wake up call to make something happen creatively since I get a lot of encouragement in my life.  Ultimately, I'm hoping that I'll finish the memoir I started about myself, my mom and stand up comedy, "Burying My Mom in Leopard Print Undies."  The very first time I ever got on stage to do comedy, my mother's house burnt down to the ground.  Seriously.  I think there's something there.
Posted by Mug of Woe at 8:33 AM No comments:

We’ll be continuing with the Mug of Woe writers’ spotlights next week, but we have a few very important announcements!

July 15th was an important day for Team Mug off Woe – it was our book release party at  the Lansdowne Pub!  The evening was uproarious, diabolical, and dare we say….magical? (it could have just have been the sangria that made it seem magical.) Check out pics of the release party on the Mug of Woe Facebook Fan Page!
Even more exciting, Mug of Woe -- the book of your dreams (and all the contributors’ nightmares),  is finally available to buy on Amazon!   We also have some very exciting things planned, such as book readings, podcasts, and more interviews with our contributors!  Stay tuned!
﻿﻿

So, your essay was about one of your worst traveling experiences, so what's the best one you've had so far?
Hmm....the rest of the time in Spain, other than the journey home, was awesome...another great experience was traveling in Moab, Utah. I fell in love with the desert, cliffs, and canyons; coming from Massachusetts, it was like being in a different world. I'd probably have to say my favorite travel experience was the day I spent in the Cayman Islands while on a cruise with three of my girlfriends. The water was beautiful, crystal clear, and warm. We spent the day paragliding and swimming in the ocean. I was so tempted to not get back on the ship.

If you could've said anything to that mean old lady on your train, what would've you've said?
I don't know if you will print what I wanted to say to her :)

If you could have dinner with anyone (past, present, dead, alive, famous, imaginary, etc) who would you choose and why?
Wayne Dyer. I just love him. He's so spiritual and peaceful...his programs and books have changed how I live my life. He teaches how to come from a place of love, and how we can create what we want in our lives, regardless of what happened in our pasts. I think he's so empowering and he is a huge inspiration to me.

We hear you're big into animals. What's your favorite kind animal? Why?
Dogs and cats are my favorites. I love animals because they're innocent and genuine, like a young child. They just want to love...it's like they're above all the ego and drama we humans create in our lives. They appreciate simple things and accept you just as you are without judgment.
Posted by Mug of Woe at 10:00 AM No comments: 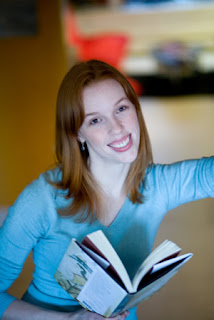 Besides being stood up, what's the worst date you've ever been on?
In college, the girl in the dorm room next to mine asked if I'd go with her on a double blind date. She sent the guy my high school prom photo and he IM'ed me asking if I had a naked photo to share with him. I was a freshman and had limited dating experience at that point, so I was horrifically embarrassed and told him off via IM. My classmate made him apologize, and she somehow convinced me to go through with the date because she couldn't find anyone to take my place and promised a free movie and dinner at Cheesecake Factory (believe it or not, that was where you took college dates you wanted to impress). I reluctantly agreed, but the date was so awkward that I couldn't wait to get back to my dorm room and the girl stopped talking to me afterwards.

We hear you're a freelance writer. Tell us about a piece you're extremely proud of. Feel free to include a link to it if you'd like. :)

I covered the wedding of a really amazing couple for PARADE Magazine: http://www.parade.com/health/2010/11/07-only-time-we-have-together-is-right-now.html The magazine flew me to Chicago for 48 hours and I followed the couple throughout their big day (which was cool but kind of felt voyeuristic at times). The groom was terminally ill so there were some interesting challenges to wedding planning; however, the couple was madly in love and I was deeply moved by their commitment to each other. (Oh, and they have a funny first date story if you read the article. The bride was hilariously candid in our interviews!) He died less than two months later, and I cried when I got the email, but I know they were beyond happy to be married to each other, however briefly.
You're about to walk the green mile, what do you have as your last meal?
Definitely cheesecake! (See anecdote above)
If you could visit anywhere in the world, where would you go?
Italy.
Posted by Mug of Woe at 8:00 AM No comments: