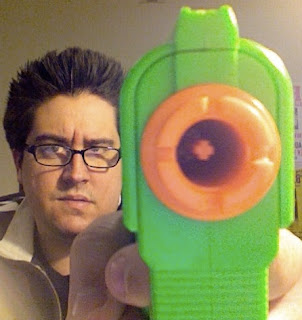 You are a stand up comedian.  What was the strangest stand up comedy show you did?
Actually, I haven't done stand-up in a while, not since my mid-20s, which was back in the year of our Lord "never you mind, a-hole."
The show that sticks out in my mind involved the first and only time my parents came to see me perform. They learned somehow that I was taking a comedy class while I was going to school at UT-Austin and insisted on coming down to see me perform. By this time, I had my act down pretty good and didn't want to mess with it since this was my first capacity crowd and I was towards the end, which means the audience would be at the right level of intoxication (not too sober to see through my obvious lack of talent and not too drunk to see if they could beam me in the head with a Shiner Boch bottle from across the room). My cousins were also in town and my parents invited them, along with a very old family friend. So I go up and do my act in the raw and trust me, it was. I cursed a lot. I yelled into the mic. I smoked and drank on stage. I did a joke about masturbating to the opening ceremonies of the Winter Olympics, which I still think is pretty good ("This close up shot of Kristi Yamguchi's tight skater's butt is brought to you by Jergen's Hand Lotion"). And I killed the joint. I didn't notice the whole time that my parents were just waiting to pounce because I had embarrassed them and everyone in my family tree going back to my Irish ancestors who used to laugh at rudely shaped potatoes. The guy immediately after me then does a full 15 minutes (10 minutes over his allotted time) on the funny, wacky things that happen in crack houses.  So look for that in "Mug of Woe 2: Mug Woer."
Do you have a secret talent?
I can do the "Human Blockhead" trick with a Q-Tip. I'm working my way up to a power drill.
If a film studio was to do a movie on your life, what would it be titled?
"The World's Fattest Starving Writer." I can see the giant Coney Island Sideshow style movie poster every time I close my eyes.
Where can our readers find more of your work and comedy?
I'm a regular contributor for the Spike Channel's website (www.spike.com), Playboy's "The Smoking Jacket" (www.thesmokingjacket.com), MTV's Clutch (http://clutch.mtv.com) and the Shadowbox Comedy Theater of Columbus (www.shadowboxlive.org). My humor and feature writing has also appeared in Aol's TVSquad.com and Asylum.com, Esquire Magazine, Cracked.com, Mental Floss Magazine, The Christian Science Monitor, Chicago Tribune's "Redeye," The Austin American-Statesmen and The Center for the Easily Amused. I don't shower much.
My website is www.dannygallagher.net. I can also be found on Facebook at http://www.facebook.com/dannyboythezombie and on Twitter at www.twitter.com/thisisdannyg. Join me or die.
Posted by Mug of Woe at 7:29 AM No comments: 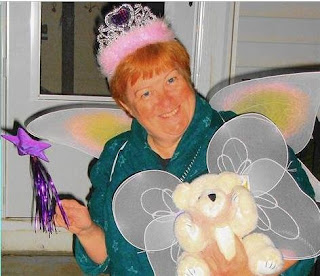 Your Mug of Woe story is about an unfortunate Christmas Eve mishap.  What was the most memorable Christmas gift you ever received?
My most memorable Christmas gift was my first "sophisticated" dress which was silver and glittery (I was 13). But when I wore that dress to a school dance it caused another embarrassing incident. The silvery outer layer was not sewn onto the inner layer (a white lining) at the zipper - so if I put my arms up (like to dance) it showed. All night friends kept whispering in my ear that my dress was damaged and my slip was showing.

You are required to move to a deserted island for one year.  You are allowed to take five items.  What do you take?  1) A year's supply of ice tea and crumpets    2) My computer (with a friggin' incredible wireless range and lifetime battery)    3) An incredibly comfortable bed   4) A professional masseuse   5) A giant tube of sun-block SPF#150

Crayola wants to create a crayon in honor of you.  What would they name the color?
Mareuse (a combination of Mary and Chartreuse)

Promote yourself.  Where can our readers find the writing of Mary DeBerry, and what other projects are you working on?
A variety of my interviews, articles and reviews can be found online at: http://www.ahtspot.com/, http://www.associatedcontent.com/ (now part of Yahoo), http://www.imageiconent.com/, and http://www.rifcfilms.com/. I'm currently writing a script for a documentary called "Higher Ground" about the destruction and resurrection of a family owned paper mill in Hindsale, NH. I'm the Publicist for Daydream Theatre Company and playwright Lenny Schwartz. We'll be traveling to New York City this summer for Schwartz's latest play, "Fidelity", which will premiere as part of The Planet Connections Theatre Festivity.  I've also started on a multi-media project about understanding and destigmatizing mental illness titled, "Mary Explains the Brain".
Posted by Mug of Woe at 2:00 PM No comments:

Your Mug of Woe story is called “The Dentist of Oz”.  If you were a dentist in the land of Oz, would you consider the Lollipop Guild a hindrance to your business or job security?
Definitely job security.  In fact, the Lollipop Guild would be my secret minions who pass out free lollipops that look like toothbrushes.
If you could speak to the ghost of a famous person, who would it be and what three questions would you ask?
I would talk to Carl Jung and get a free psychotherapy session.  Dude, what's up with my crazy spider dreams?  What's heaven like?  How do I shake this shadow?
You are required to move to a deserted island for one year.  You are allowed to take five items.  What do you take?
I am not really cut out for island living.  I assume you have a luxury villa for me with all the domestic accoutrements.  Otherwise I'm not making the move.  Do I have internet access?  I would take a power generator and my Ipad.  I really think I could entertain myself pretty easily with access to TV, music, books, Facebook and word processing for writing.    Hmmm, maybe a yacht...that counts as an item right?  I will settle for a paddleboat if you think a yacht is too much.   Let's see... I suppose I would need a Cessna too, to island hop.   Does a pilot/male companion count as an 'item'?  I would concede the paddleboat for the man.
Promote yourself -- what are you working on right now and where can readers find your work?
I'm a contributing author for opentohope.com and my blog is at followthesigns.blogspot.com.  My new book entitled Somewhere In Between is available on Kindle.
Posted by Mug of Woe at 8:06 AM No comments: 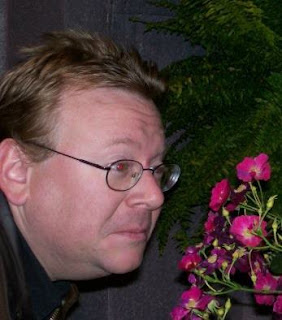 People are talking about time travel.  What year would you time travel to, and what would you do when you are there?

I would go to the year 2020. I would meet Future Kris from the year 2020 and sit down with him and chat over a baloney sandwich.


And future Kris would look me square in the eye and say,

Except Future Kris will have less hair.

You never know because it's..THE FUTURE.

If there was a deity that handed out superpowers, what powers would he/she give you?

I would like the power to text while driving.

If someone was to write The Kris Earle Story, what would he/she title your biography?

Pimp yourself – where can our readers find your comic stylings?
My mother keeps a few of my colorings still on her refrigerator. One is from 1977 and depicts a fun filled summer scene of bunnies picnicking on an orange field with an above-ground pool with a diving board. In the sky above is both the Death Star and a Giant Ass that shits fireworks. Both my 2nd grade teacher and my principal of the school didn't think it was fireworks. My mother and step-father got a phone call and had to meet with the principal and teacher to convince them that it wasn't a giant ass that shit fireworks even though it was. We won.
Posted by Mug of Woe at 8:59 AM No comments: