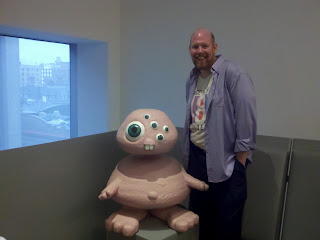 Mike Ryan is a Rhode Island writer, actor, and film guru. His essay in Woe of the Road provides valuable safety information on surviving an attack by Bearzilla.

You are very active in the Rhode Island film community.  What was the strangest character you ever played in a film?

I once played a serial killing priest with a punctuality fetish and a taste for human flesh. Eating fake skin off a naked woman who was playing dead was pretty odd. Because of my height, I’ve also played a lot of butlers, but that’s not nearly as weird.

An alien from outer space is on your front porch.  What three questions would you ask it?

How was your flight? Why has it been so long since you visited? Want a beer?

Who would win in a Godzilla vs. Bearzilla showdown?
Bearzilla, claws down. How old is Godzilla, anyway? He’s gotta be getting on in years, and ready for the geriatric league.

Promote yourself.  Where else can we find your work?

Mike wrote a monthly technology column for Providence Monthly called Technobabble and currently writes a regular column on local film events for Motif Magazine in Providence. Any day now, you’ll be able watch his work on screen too at the Showcase. Just need to get Tom Cruise on board. Any day now.
Posted by Mug of Woe at 5:30 PM No comments:

Hey Woeians! Check out our TV debut on It's All Write with Suzette!

Mug of Woe is a collection of humor essays of one’s most embarrassing moments. The contributors are stand-up comedians and professional humorists. Mug of Woe won Best Anthology at the 2011 New England Book Festival. Kyle Cranston is the co-editor (with Jenn Dlugos) and a contributor to Mug Of Woe. She talks about the concept of a humor compilation, the selection process, what makes humor essays outstanding, and the publication process. 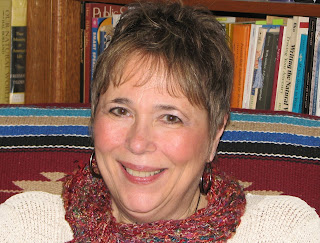 This week's woeful contributor is Carol Raitt. Her Woe of the Road essay, "Move Fast. Strike Hard. Avoid the Crunch," details a night in a notel motel with several....let's just say...small roommates.


In your essay you mention once having to "extract a blood-sucking tick from my neck." Care to elaborate?
What can I say? Arachnids find me irresistible. Or, was it my sweaty, exposed skin that screamed "Bite Me!?" By the time I discovered the raised bump on my neckline the tick had consumed what I knew would be its final meal. With one good slap of my hand its engorged body exploded and I removed the annihilated (now flaccid) tick with a tissue.

If you had to pick an insect to share a room with, what would it be?
One that is quiet, unobtrusive, and respectful of my space; a ladybug might be the perfect roommate. And, ladybugs eat aphids and other smaller insects that harm plants.

Promote yourself -- where can we find your work?
My work has been featured in GREENPRINTS -- The Weeders Digest and in 2011 my non-fiction essay, "The Kill" received honorable mention and was included in the Outrider Press Literary Anthology: A Bird in the Hand. Visit any of these three national park visitor centers -- Great Sand Dunes NP, Lassen Volcanic NP or Wrangell-St. Elias NP -- and you'll see another side of my writing. As a writer-naturalist I have written hundreds of interpretive signs about geology, plants and animals. I am currently working on a collection of nature essays about birds and other wildlife that visit my urban, native plant garden in Seattle, WA.
Posted by Mug of Woe at 6:09 AM No comments: 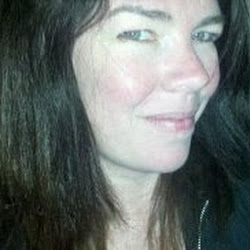 This week's contributor is Colleen McCauley Coughlan. Her Woe of the Road essay, Spring Bake, proves that you should always wear sunscreen and only travel with people who actually like you.

What would the title of your autobiography be?

"Going Nowhere Fast!"  Or "How To be a middle aged Dependent"

Crayola wants to make a crayon in your honor.  What color would it be, and would would they name it?

Probably some color close to the color of blood due to my violent tendencies.  "Stigmata" might be a good name.  Or "OUCH, stop hitting me!"

You recently had a funeral for your departed uterus.  Have you ever held a religious ritual for another body part?

Not a funeral, per se, but I did spend a considerable amount of time mourning my flat & stretch mark free abdomen.

Promote yourself.  Where can our readers find your work/stand-up?

When I am not procrastinating on Facebook, you can find me spending a LOT of time at open mics and karaoke!  Or texting.  Or hiding from my kids.
Posted by Mug of Woe at 6:18 PM No comments: