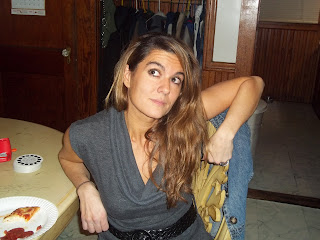 Erica Deis's tale in Woe of the Road is a cautionary tale about Canadian travel. Specifically...never run over a man named Pierre.

If you found an alien from outer space on your porch, what three questions would you ask it?

Are we talking a freakishly large headed alien, or maybe one of those Star Trek girls with fake boobs and just kind of pointed ears?

I'd ask, "On your planet, do you know it's polite to call first before you just show up on someone's porch?" I wouldn't get too irked about it. It could be a cultural thing. Maybe aliens bombarded each other's porches all the time.

As I lead the alien to my washer and dryer, I'd ask if they knew it was a tradition in our culture (or at least my house) if you did show up unannounced on someone's porch to do all of their laundry, and fold it. I'd put it away this time, but others might not be so gracious. I'd even throw in a juice box or a glass of wine before I tossed the alien back on the porch.

If the alien had on cute shoes, or it was a male alien and he had on a jaunty ascot, I would ask "Hey, where did you get those shoes or ascot?" This would make the alien feel like they had a knack for style. It also would be a good segue into directing them how to separate the white clothes from the colored clothes. And, if they started crashing other porches and the residents were all "touchy-feely" and didn't make them do their laundry, at least I'd be the girl who complimented their attire. At least its something.

What would be the title of your autobiography?

Keno pencils are so useless. They are short, stubby, ergonomically unsound, and do not have an eraser. What is the point of having a pencil without an eraser? There is something violently aggressive about them. And as far as wood paneling goes? I still haven't completely worked through that.


What would be the title of Pierre's autobiography?

I suspect I was a victim. I think he preyed on American women by leaping in front of cars driven by American women. It's dangerous, but must have earned him pity sex somewhere along the line. It could have cost him a limb, and how could you not put out if you ran over a cripple? He was a good looking guy,even splayed out on the pavement. If he did lose an arm, he couldn't do that weird pat-slap kiss thing. That first kiss may have been slightly less repulsive. If that were the case, his autobiography would be "Jumping In Front of Cars: A Canadian Carnival of Lust".

Promote yourself. Where else can our readers find your writing?

You can read one of my haikus on any downtown bathroom stall in chalky red lipstick until the cleaning staff catches wind of it. I'm working on a couple of projects that I'm excited about. It may involve lipstick, but in a more abstract way.

You can friend request me on Facebook.  You'll probably change your mind about that decision around the time you receive your fourth dancing cat at 4 a.m.  You'd be surprised how many people like to Youtube their cats dressed up like elves doing the Macarena. You will also be amazed how much I enjoy plastering your profile with them.
Posted by Mug of Woe at 9:40 PM