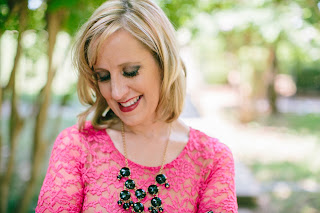 In  Mug of Woe: Wreck the Halls Robyn Renee Riley explains why it's better to just keep those festive holiday greetings to yourself.

My strategy about Christmas cards this year was  to avoid them altogether. It has been a terrible year with the teenagers in this house. There are some things you cannot put into a Christmas letter. They would be more appropriate in a suicide note.

You like to write about your adventures of being a modern-day Pastor's wife. Tell us one of your favorite stories about the Pastor.
You have to understand the Pastor is a smart guy. He has three master's degrees and a Ph.D. Unfortunately none of his advanced coursework had anything to do with relationships. When we were dating - and serious - he invited some friends I had not met over to his house for dinner. I agreed to cook and prepared a lavish meal. When the couple walked in the door, the Pastor said, "This is my girlfriend, April." I have no idea where that came from. He to this day (yes we still talk about it) claims he has no idea where "April" came from. My first words to this couple were "Actually, my name is Robyn." DInner went as well as you might expect.
If Crayola was to name a crayon after you, what would it be called?
I wouldn't care what color Crayola used or what they might call a crayon representing me, but my crayon could only be used to color precisely within the lines. Someone has a little OCD. In fact, let's leave that crayon in the box altogether. We'll just open it ever once in a while to look at the perfect, new rainbow of crayons. And maybe smell them.
Promote yourself. Where can our readers find more of your work?
I've written a book about the Pastor - we'll see what happens! You can find me on Twitter and Facebook at robynreneeriley. I've had a blog for years, imarriedthepastor.blogspot.com. I promise I'll be better at posting on it - I blame the teenagers. Do you have any idea how many times I have been interrupted just trying to write these four things? Sheez! 2013 is going to be a great year. The kind of year people write Christmas letters about.
Posted by Mug of Woe at 6:30 AM