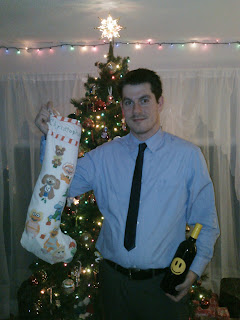 If you had any delusions that Norman Rockwell was right about the good ol' fashioned family holidays, Christopher Griffin's essay in Mug of Woe: Wreck the Halls will knock that foolish notion out of your head.

You know, I was really hoping that the whole "end of the world" prophecy would have finally come true after so many misleads in recent years. At least, this time, it would save me from having to attend the annual family holiday gathering. Maybe I'll bring whatever girlfriend-of-the-week I'm seeing and faux-propose to her on site, or maybe my ego will get the best of me and I'll just constantly remind any and everyone who cares to listen that I'm a published comedy writer and they should be grateful that I'm even gracing them with my presence. Regardless, as with all things, I'll probably just wait until the last possible second and then flip a coin. That's completely rational, right?

You claim you have the unenviable role of 20-something serial dater. Tell us about one of your worst blind dates.

I've never been on a true "blind" date before. A couple of months ago, though, I was at a concert with a friend of mine and ran into a girl who I had been courting for the better part of the year. She and I had gone on three or four pretty good dates but for whatever reason, those dates would be spread out by weeks, and sometimes months, and they would often occur after we would randomly run into each other at a bar while one of us were out with friends and the other was on a date. Anyway, so I run into this girl at a concert I'm at, and it's funny the way it happened, because I saw her approach the bar without realizing who it was, and I interrupt my friend while she's in the middle of telling me about a guy she met.

"Hold that thought. The girl who just ordered drinks at the bar is totally my type and I want to meet her."

So I approach her and try to play it casual, as if I'm there for a drink and not to meet her. We both turn to each other and make eye contact at the same time, and of course it's this girl who I had gone on several dates without ever officially "dating." As if to abide by the same script we've gone over for months when we run into each other in the most random of places, she tells me that the reason I hadn't heard from her was because she had gotten back together with her ex-boyfriend. We hug, share a kiss for old time's sake, and part ways. As if my life hadn't found contentment enough in reminding me, time and again, that it's a caricature of itself, I pass her by as I'm walking to the men's room during the headlining band's set, and she's laughing it up with a girl who I hooked up with months prior. Regardless, my Twitter account the next day was rather entertaining, as I was getting harassing messages from a girl who I didn't know, never saw before, and never met, telling me what an awful person I was for my affiliation with the two of them and suggesting that I shouldn't have been at the concert. I guess that's the closest thing I've got, in terms of worst experiences that shine a light on why my dating life is so unenviable. For more stories of my dating experiences, ones that involve actual dates, with women who wish they were reality TV stars and have openly admit to having dated me because I looked "just like their ex", The Woes of Dating releases in the spring of 2013. I'm not even sure that's what the eventual title will be, but I think it has a nice ring to it, so I'm pitching it. Woes of Dating. Spring of 2013. It's coming.

If Hollywood was to make a movie about your life, what would it be titled?

Self Made because everything I am, and all that I've accomplished (as little as that may be), is the result of my drive, my ambition, and my refusal to listen to the "logic" of family and friends. I believe that fate comes down to the hand that we're dealt in life, and I just hope I'm blessed to live long enough to be dealt that ever-elusive winning hand. It's coming. I know it is.

What other writing projects are you working on right now?