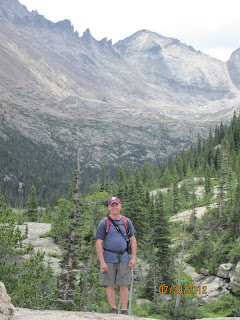 Thomas Tulipani's story in All Woe Great and Small confirms that there are really three absolutes in life:  death, taxes, and indigestible  pantyhose.

Along the lines of eating things he shouldn't - he liberated an opened bag of chocolate raisins off of the table in the kitchen one day.  Later in the week, as I was mine-sweeping the backyard, I noticed several rain-diluted piles had some nice shiny flecks of aluminum foil scattered within them.

You are also a cartoonist. If you could have lunch with any cartoon character, who would it be and why?

Probably Jason Fox from Fox Trot. He reminds me of myself in many ways.

If Hollywood was to make a story about your life, what would it be titled and why?

When I was 11 or 12,  I planted a kernel of corn in our garden and eagerly anticipated reaping the corn once it had grown.  When it was ready,  I picked the lone ear from the stalk and phoned my mother for instructions on how to cook it.  Her directions were to "fill a pot with water, put it on the stove and turn it on to boil."  I did the first two things, but as I surveyed the dials on the back of the stove, I read "bake" "broil" but no "boil."  Perplexed, I phoned her back and asked the now infamous question (in my family), "Where's boil?

My family has taken many opportunities to tease me about this.  I've since become a pretty decent cook to the point where my wife suggests I should become one.

Promote yourself. Where else can we find more of your work?

I have an eBook for sale on Amazon Kindle titled "Reflections of a Punstar, A Pun-O-graphic Collection" which contains my original comics. Many of these same comics can be seen on my website www.Punstar.com,   WheresBoil on Facebook, and @WheresBoil on Twitter.
Posted by Mug of Woe at 9:16 PM